This week, we are very lucky to read a guest post by Alice Hutton. Alice is dedicated

to building healthy communities in both her personal and professional lives. During the twenty years that I have known her, she has never ceased to be creative and innovative in constantly seeking ways to build community. She is currently a community health planner and consultant in Ottawa, Ontario.

Parks often have an untapped potential for creating community, learning, improving the health of a population and making our urban spaces more vibrant and engaging.   But how is it possible to successfully capture and facilitate this potential?  This is a challenging and oftentimes daunting task. 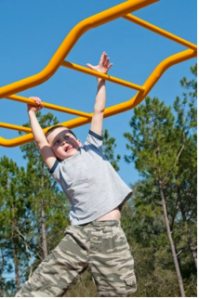 A couple of years ago our small neighbourhood park was scheduled to have an older wooden play structure decommissioned.  The community association called some neighbours together and provided the plan for what would be replaced.  The new structure was less than inspiring.  It was small; it was geared only towards preschoolers. The plans made the neighbours angry.  They felt that the old play structure was better than what was being suggested as a replacement.  With some coordinating, a small community meeting was arranged in the park with a city staff member. Frustrations were expressed and conversations began regarding the role of the park, the play structure and what options might be available.     At the time my daughter was a preschooler and I listened as several parents argued strongly for the need for monkey bars and swings.  The city staff member and the community came up with a creative way to get the best structure available within the budget and maintain the features of the park that were considered assets.   And the new structure did indeed have monkey bars.  I was not exactly sure why monkey bars were so important, but both parents and older children maintained with conviction that they were necessary.

Now two years later and a parent of child who, after the 578th time of attempting the monkey bars, succeeded and as someone trying to understand the greater importance of parks, I think I am beginning to have an appreciation of why monkey bars are important – both figuratively and literally – in the creation of public spaces.  To successfully master the monkey bars takes practice, lots of it.  In the process of watching a child learn to swing their body from bar to bar, it becomes obvious that mastery only comes with many failed attempts. However, the child optimistically maintains a goal of reaching across the chasm by watching other children; learning how to move their bodies differently; taking chances, and sometimes painfully failing with a thump on the ground.

I believe that many of the parks I consider successful and uniquely vibrant have achieved their success, due to the persistence of optimistic visions of community members and doggedness to continue striving for vibrancy even through set-backs, just as a child does with the monkey bars.   One of the parks I find most inspiring is Dufferin Park in Toronto.  It is a space where as soon as you enter the park and start to walk through it you realize that it is pushing the boundaries of what a typical urban park can be.  A group committed to the park has built brick ovens, where pizzas can be baked and community meals prepared.  A cob (mud and straw) outdoor kitchen area has also been constructed in a design that imaginative and brings to mind mystical homes of fairies or hobbits.    The park is also committed to permitting open fires through a series of maintained fire pits.   When you move to the playground corner, the typical playground structure is fenced off by a wooden rail fence that welcomes sitting and is adjacent to a huge sandpit with water for children to play endlessly digging and creating.    The success of the park and unique activities that occur there are primarily through the efforts of an organization called “Friends of Dufferin Park”.   They have built their success through on-going commitment and creatively figuring out new ways to integrate ideas and initiatives into the park.   However, it has not always been easy and there have been many challenges along the way, including recent difficulties in the area of job sharing with city staff.

This dedication to making spaces vibrant is not an easy thing to achieve and although government structures and processes at times might make these endeavours difficult to succeed, other government agencies and organizations are trying to gain a better grasp of how public spaces can work.   Dufferin Park has spurred the creation of Centre For Local Research into Public Space (CELOS) with a specific focus on public spaces within Toronto.  Meanwhile the Ontario provincial government is supporting the exploration of how parks and public places can help residents be healthier and happier in partnership with 8-80 Cities and internationally organizations such as the Project for Public Spaces has been working on this very topic since the 1970’s

With all this energy and commitment why is making successful public spaces so difficult? And why is there not a “Dufferin Park” in every city?   I think the answer comes back to the monkey bars: each park is like a child and the community that supports a park has to learn on their own (but by watching others) how to navigate the coordination, engagement of neighbours, community members, government and businesses and continue to dream of potential even if there are setbacks along the way.     And most importantly, they must listen.   Listen to those who use, used or hope to use the park and what they consider important, because at the time something like monkey bars, or a brick oven might not seem all that important or practical but those who may have some experience and some foresight, might know the value of an element you consider insignificant.

One response to “Parks and Public Space – Consider the Monkey Bars”